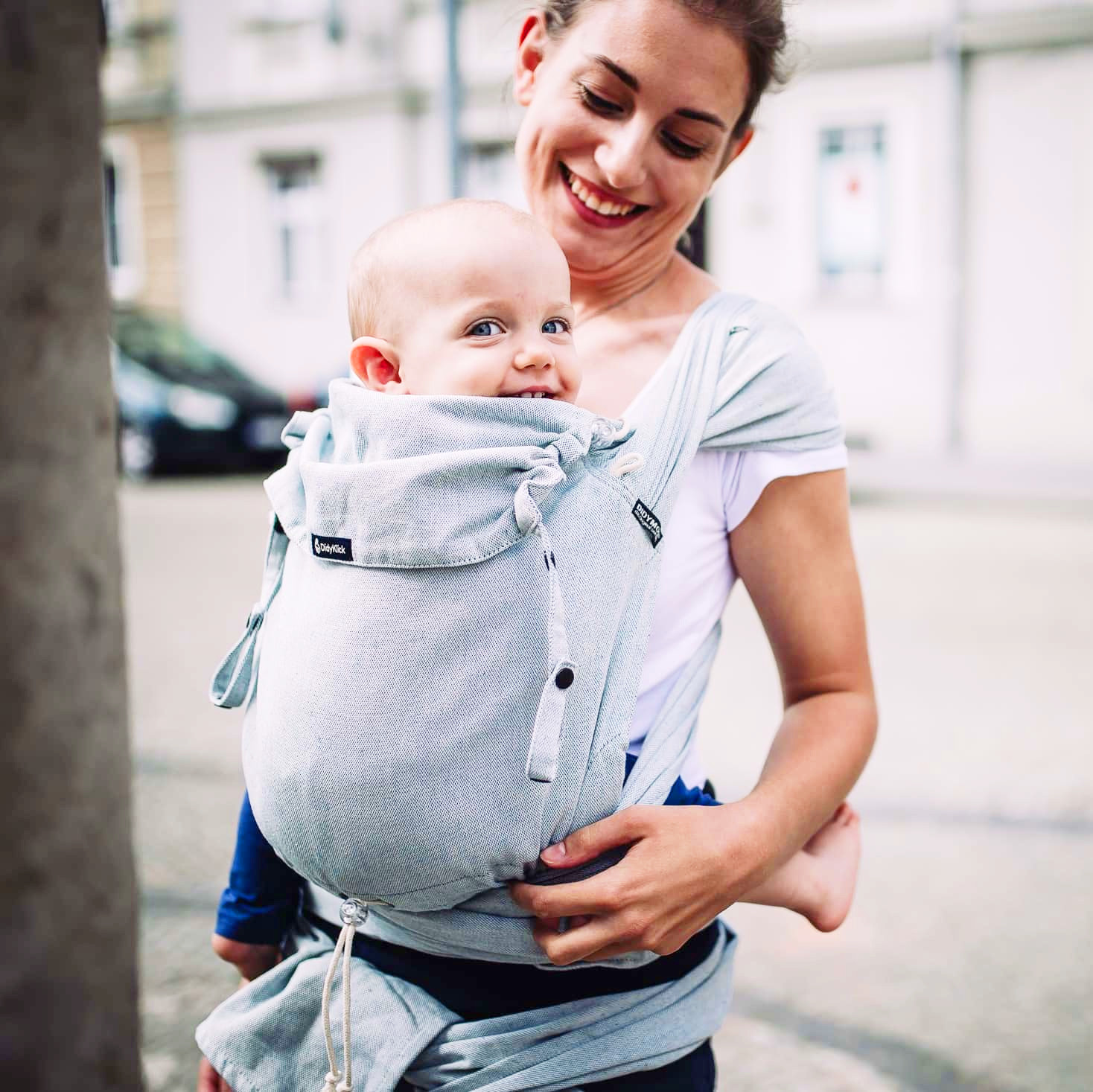 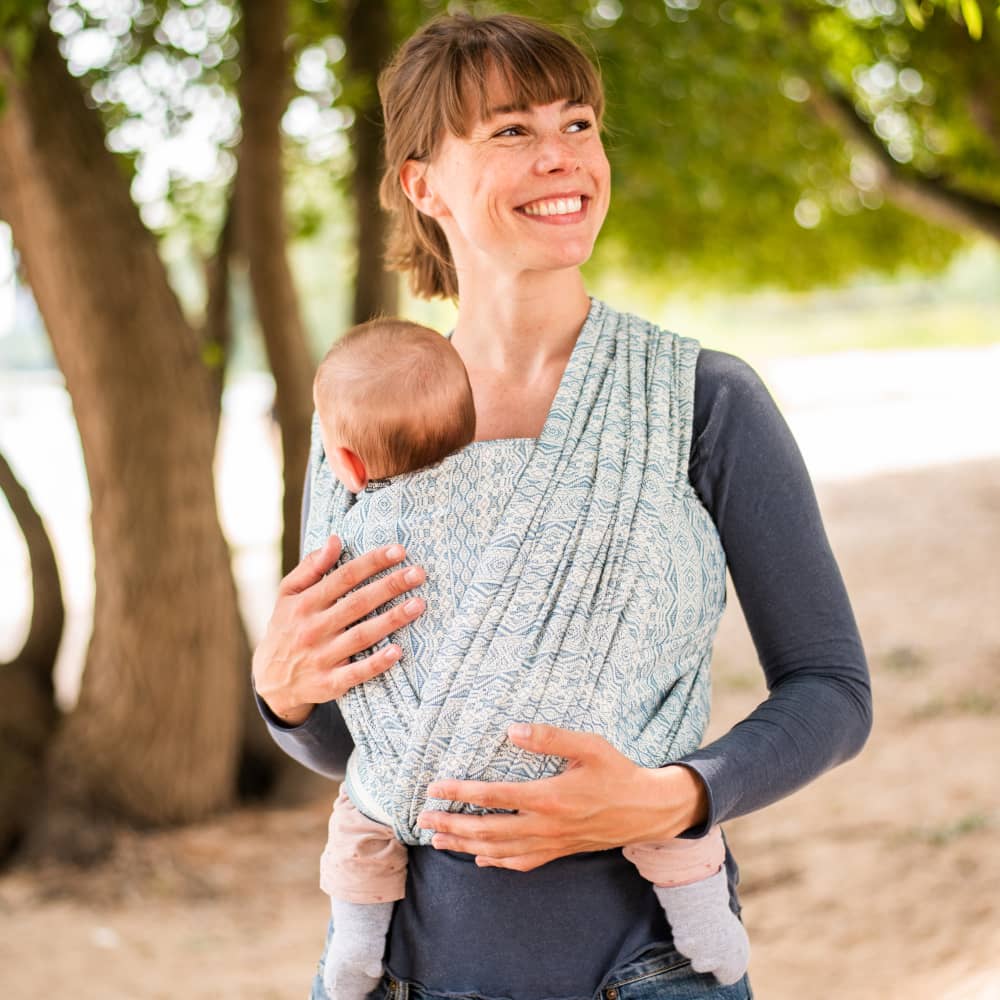 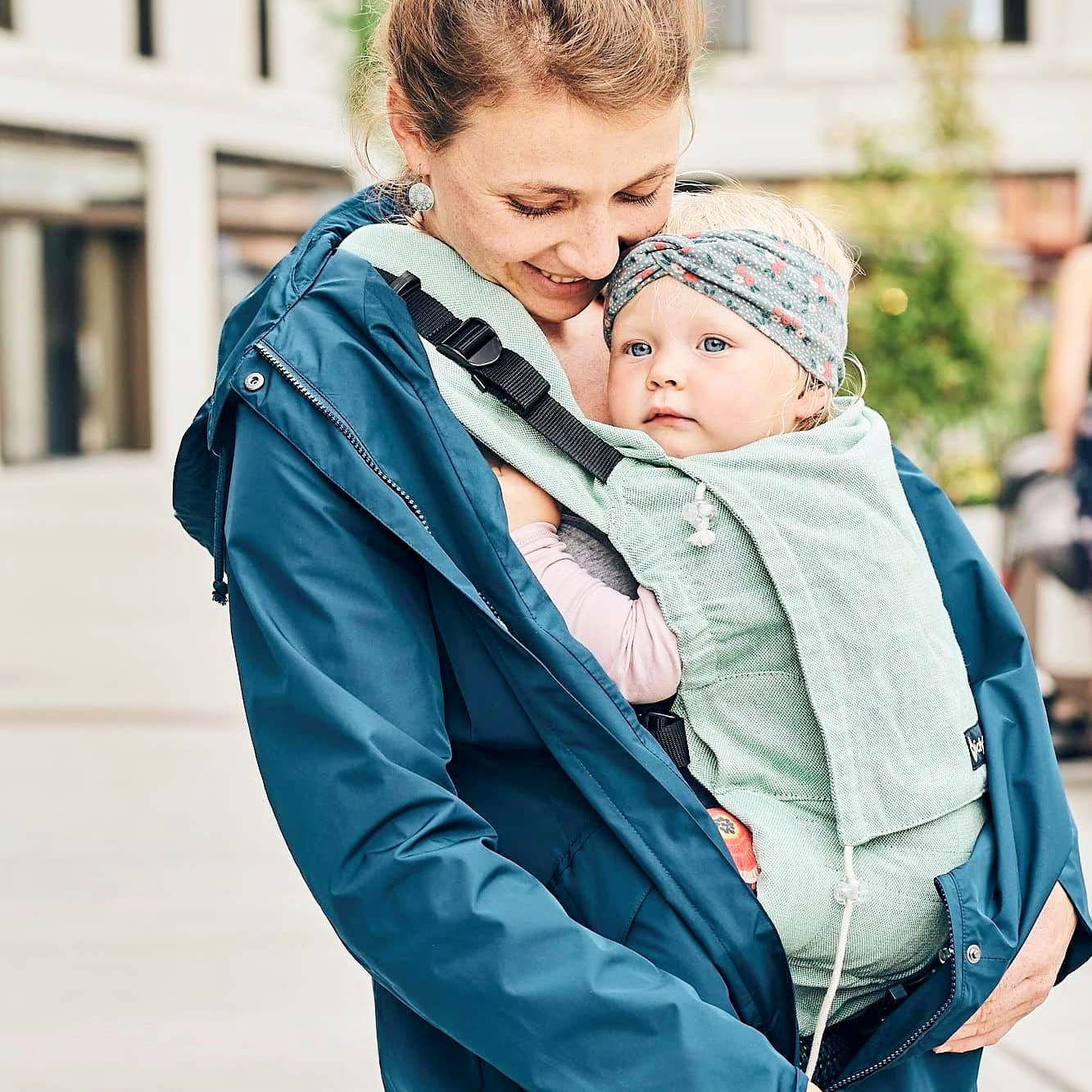 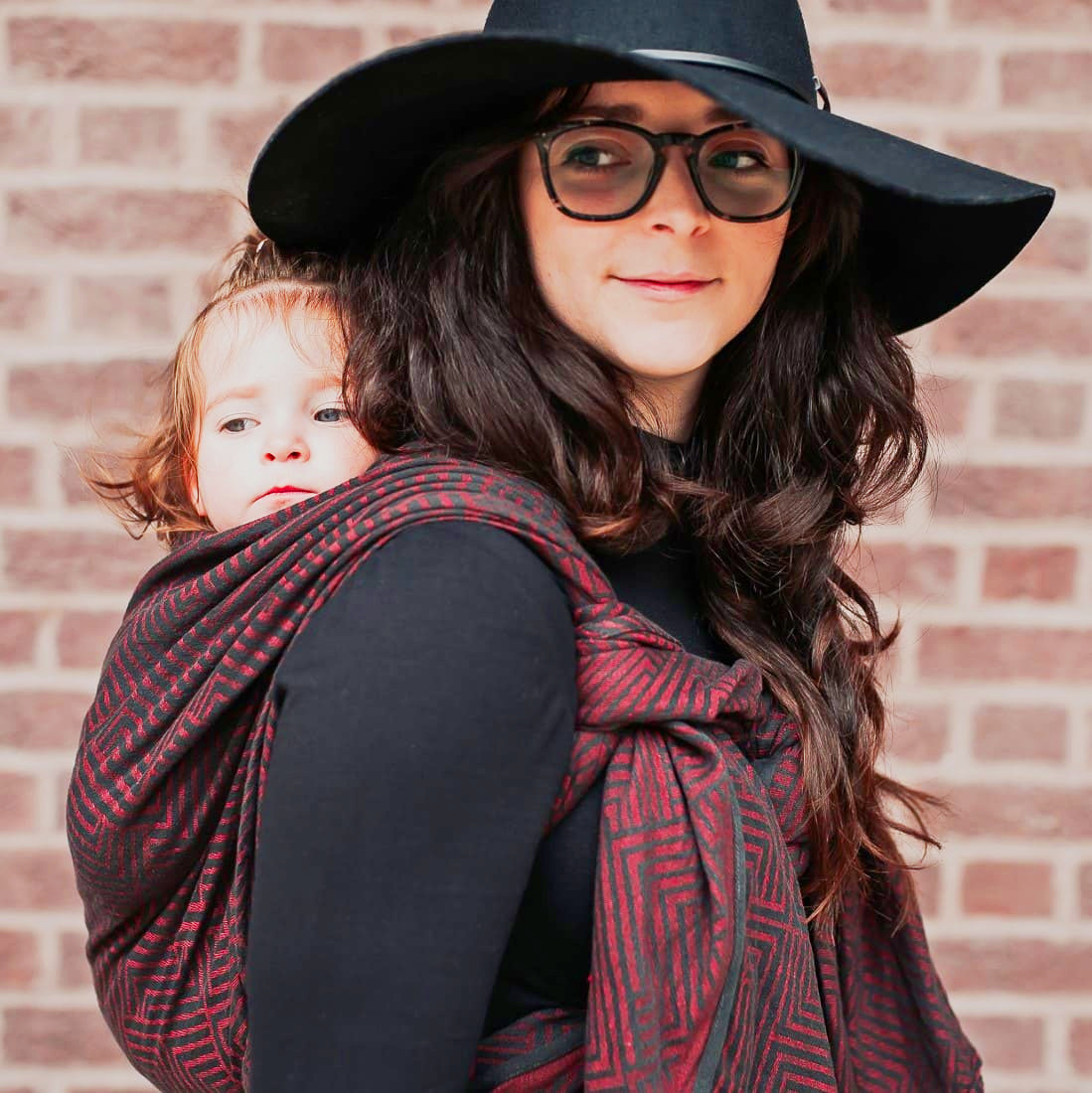 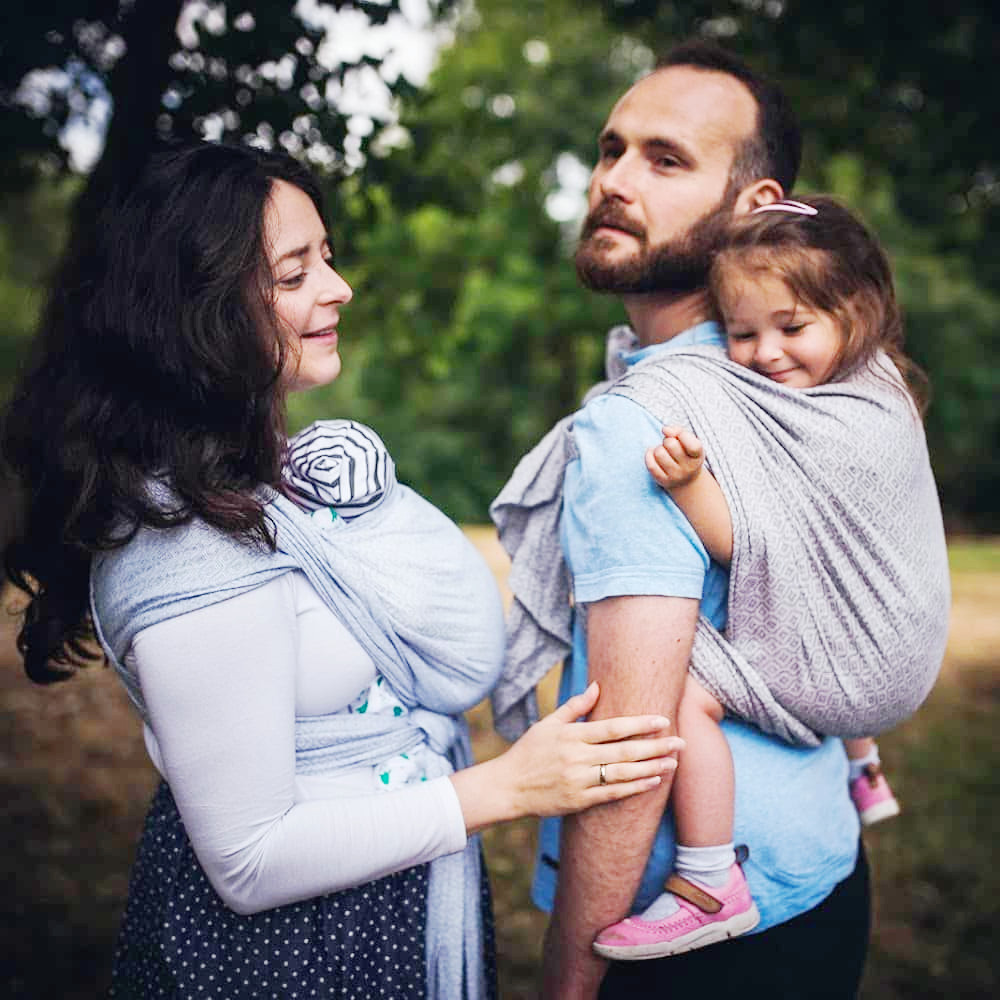 Why Babywearing?
Learn why babywearing is so important for bonding and development
Baby Slings and More
All the information about our slings
DIDY Baby Carriers
All the information about our baby carriers
Instructions and Tutorials
Every beginning is difficult. But it doesn't have to be. Become a pro at carrying with our video tutorials.
Babywearing Information Centre
DIDYMOS Baby Carrier Advisor Interactive Size Advisor Carrying Twins DIDYMOS Care Tips Using our Slings in Hospitals and for Premature Babies FAQ
Sustainability and Social Responsibility
Our DIDYMOS promise - keeping sustainability at the heart of what we do from start to finish
DIDYMOS Service
Contact Babywearing Courses near You Directions to DIDYMOS DidyTry - Test Drive DIDYMOS For Professionals Informational Materials for Everyone
Baby Carrier Advisor
Sizing Guide 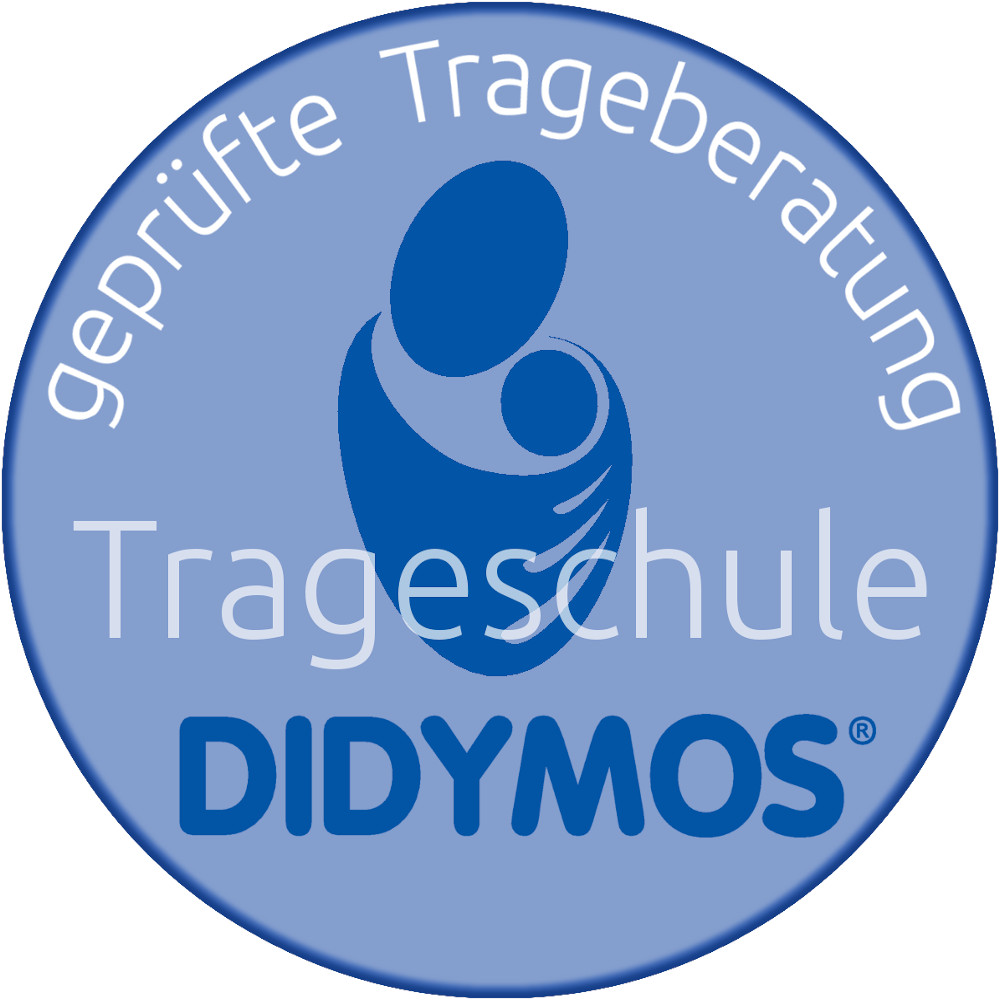 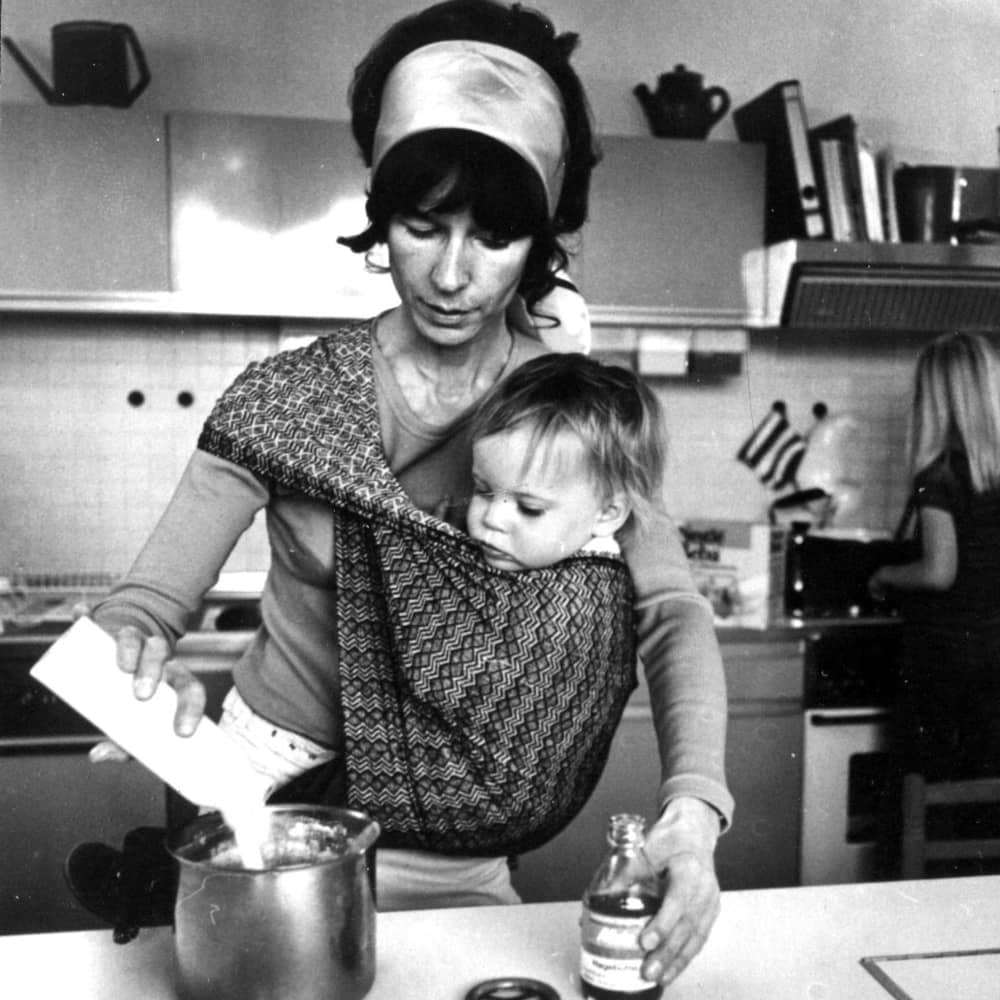 DIDYMOS Wrap Sling – Since 1972
Get to know our company heritage
Who we are: DIDYMOS
Our DIDYMOS Team Join the DIDYMOS Team
DIDYMOS - The Shop Location
Directions - How to find us
DIDYMOS Retailers worldwide
Our Corporate Responsibility
Learn more about our commitment and awards
DIDYMOS Service
Contact DidyTry - Test Drive DIDYMOS For Professionals Informational Materials for Everyone
DIDYMOS Community
DIDYMOS Blog
Tested by Didy Parents
DIDYMOS Gallery
Ideas Workshop
The Sling as a Hammock The Sling as a Swing More Ideas
Show all categories DIDYMOS in the Media Back

DIDYMOS in the Media

It all began in 1972 with an article in the June issue of Germany’s Stern magazine which presented Erika Hoffmann as a modern woman who carried her children in a sling.

There are now many other media outlets, print and online, reporting on the topics of babywearing, sustainability and fair production in conjunction with DIDYMOS. You will find a selection of these publications here. 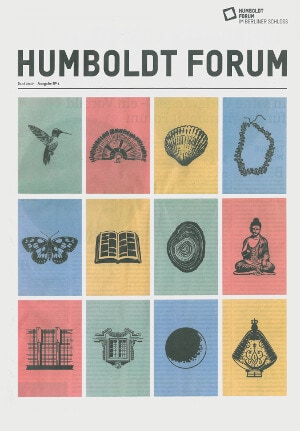 "MOTHER AND BABY: CHEEK BY JOWL

Walk around Berlin these days and you might encounter someone carrying their baby in a sling. [...] This was clearly not the case 45 years ago. Back then a baby being carried in a sling in public was a sensation considered worthy of an entire article in the popular magazine "stern".[...] The woman at the center of all the attention was Erika Hoffmann, the mother of four children. A woman who somehow had to get through her day without having a grandmother around to help out and, more often than not, without any support from the children's father, who was working to put bread on the family's table."

This article originated in a lively exchange of correspondence between the author Jane Redlin and Erika Hoffmann: (Translation by DIDYMOS)
“I had a very intensive correspondence with your mother many years ago subsequent to the exhibition „Kinder mobil“ (2007) (“mobile children”) and about the related subsequent research on this subject. […] She is a remarkable woman. I have become acutely aware of the extreme efforts she has taken upon herself because of the Baby Wrap Sling.

The results of our correspondence were presented 2014/15 in the small studio exhibition „Nach Europa getragen – Die (Wieder-) Entdeckung des Babytragetuchs“( “Carried as far as Europe-The rediscovery of the Baby Wrap Sling”). [...] A photograph of the exhibition can be found  in the book ‘Prinzip Labor: Museumsexperimente im Humboldt Lab Dahlem’ ('Principle laboratory: experiments with museums in the Humboldt Lab Dahlem') which was published 2015 by the Nicolai publishing house.” 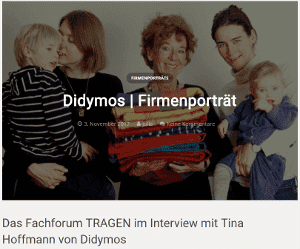 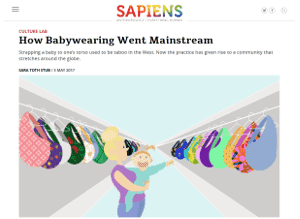 Strapping a baby to one’s torso used to be taboo in the West. Now the practice has given rise to a community that stretches around the globe.

[...] Babywearing slowly gained acceptance as approaches to parenting changed in the United States throughout the 1990s—most notably with a marked increase in rates of breastfeeding and a shift away from the idea that babies needed to be taught to self-soothe, McKenna says.

“Through the years, babywearing became less taboo,” says Tina Hoffman, managing director at Didymos, a German company that has been making woven wraps since 1972 when Hoffman’s mother needed something to carry her and her twin sister. The practice attracted a lot of stares and attention in their German village, but, Hoffman explains, her mother believed so strongly in the benefits of babywearing that she raised funds and started making and selling wraps.[...]" 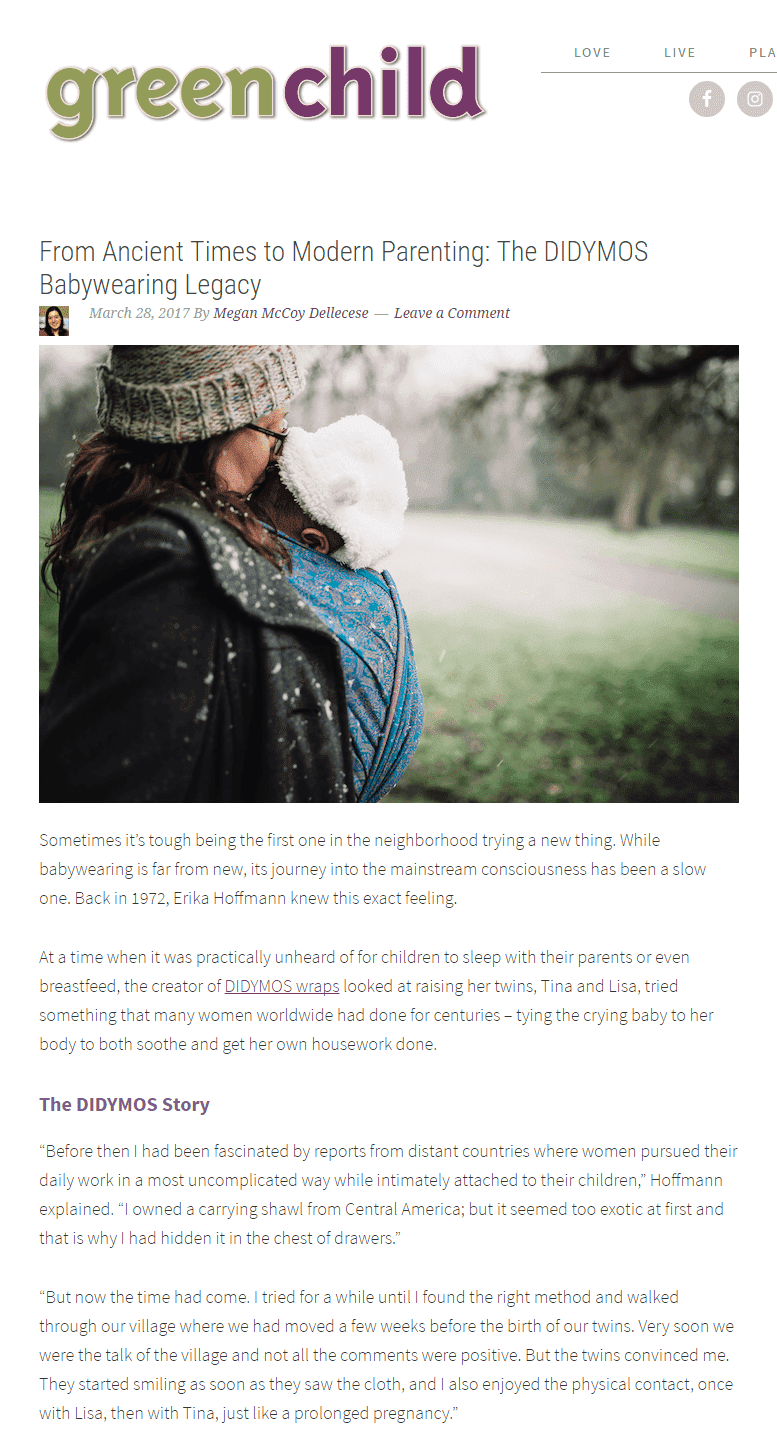 From Ancient Times to Modern Parenting: The DIDYMOS Babywearing Legacy

Sometimes it’s tough being the first one in the neighborhood trying a new thing. While babywearing is far from new, its journey into the mainstream consciousness has been a slow one. Back in 1972, Erika Hoffmann knew this exact feeling.

At a time when it was practically unheard of for children to sleep with their parents or even breastfeed, the creator of DIDYMOS wraps looked at raising her twins, Tina and Lisa, tried something that many women worldwide had done for centuries – tying the crying baby to her body to both soothe and get her own housework done.

'Before then I had been fascinated by reports from distant countries where women pursued their daily work in a most uncomplicated way while intimately attached to their children,' Hoffmann explained. 'I owned a carrying shawl from Central America; but it seemed too exotic at first and that is why I had hidden it in the chest of drawers.'

'But now the time had come. I tried for a while until I found the right method and walked through our village where we had moved a few weeks before the birth of our twins. Very soon we were the talk of the village and not all the comments were positive. But the twins convinced me. They started smiling as soon as they saw the cloth, and I also enjoyed the physical contact, once with Lisa, then with Tina, just like a prolonged pregnancy.'" 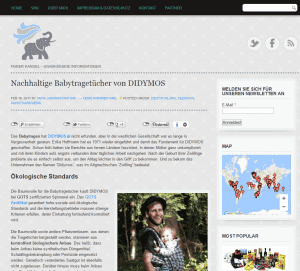 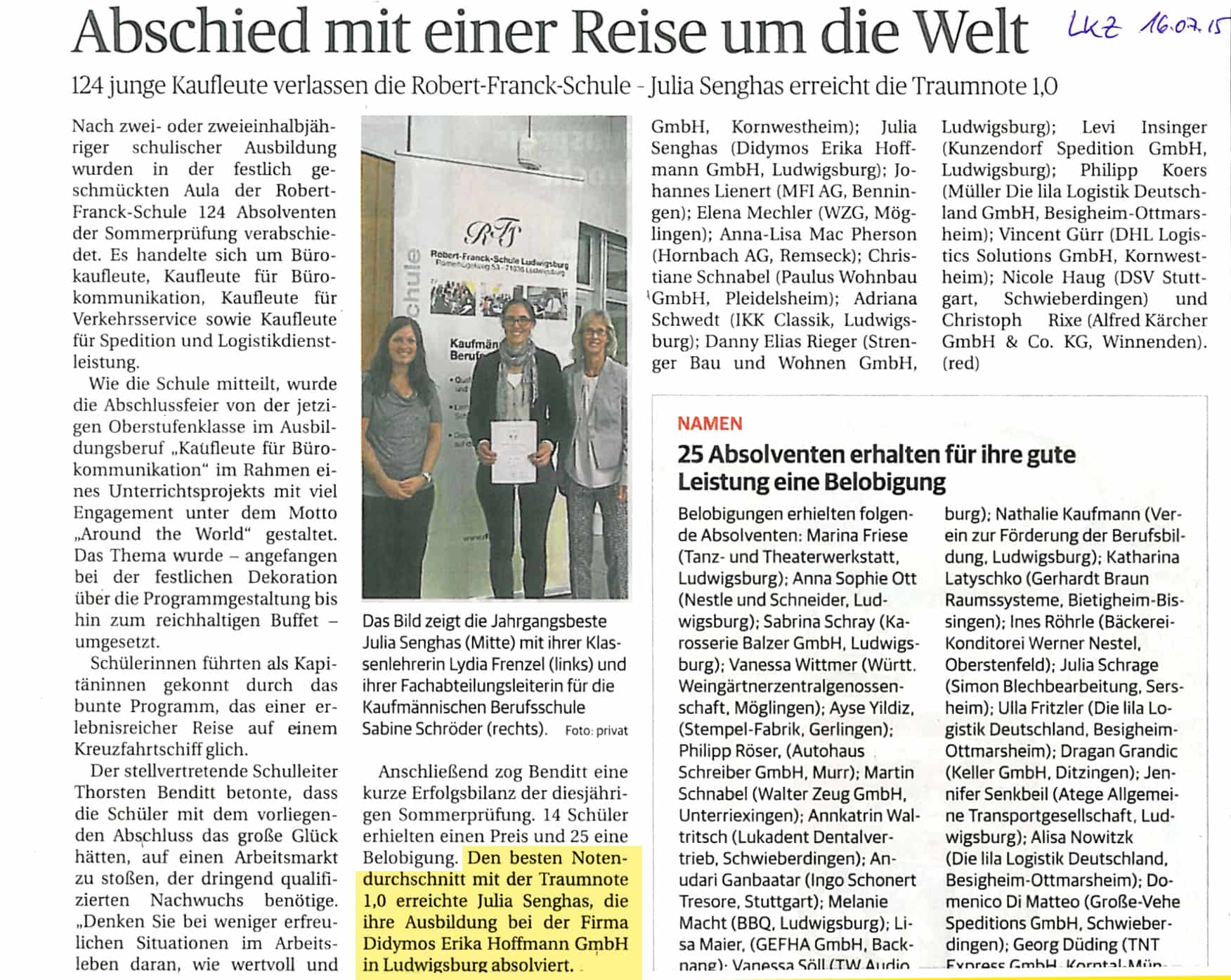 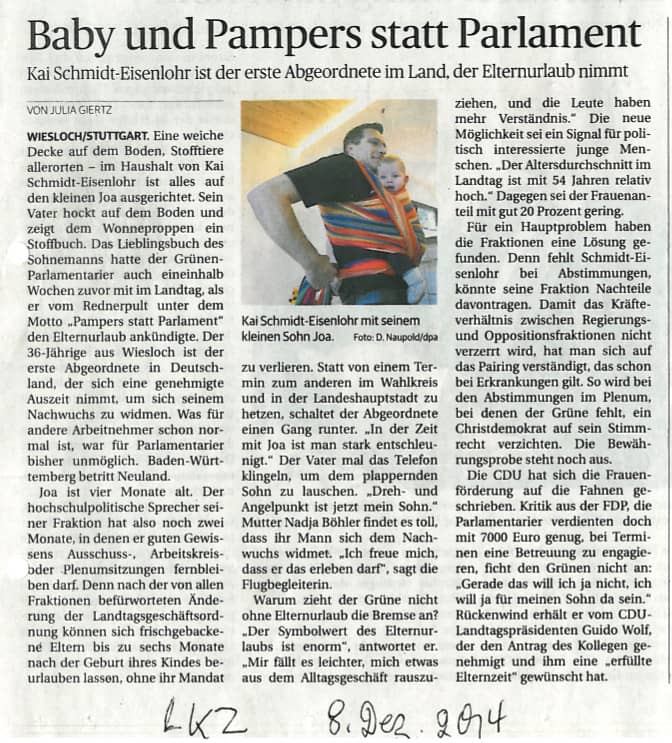 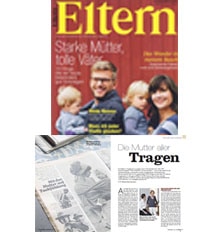 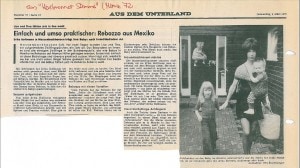 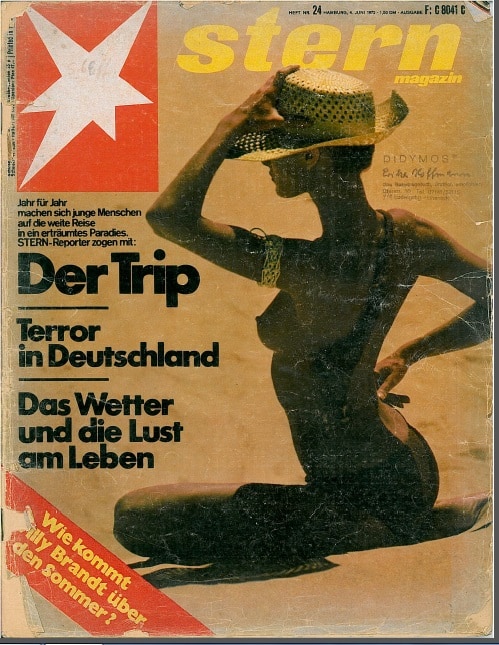 Your wishlists
Loading...
We look forward to receiving your call: +49 7141 97571-0
Send us your questions and feedback via our easy contact form.
Register for our DIDYMOS Newsletter and you will always be up-to-date!